Gretty Good Time is about a paralyzed woman’s fanciful explorations into the meaning of her life with excursions into the devastating aftermath of dropping the atomic bomb on Hiroshima.  Playwright John Belluso adds hefty doses of levity in what could otherwise be dismal and dire issues, and director Jeanette Buck seals the deal with a light touch of whimsy. 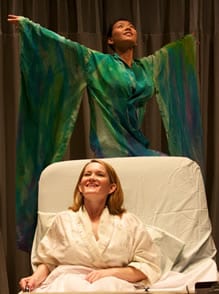 The “must see” feature is Ann Colby Stocking as Gretty, a play name for Greta, a tough as nails survivor of childhood polio who is ready to chuck it all rather than stay imprisoned in her nonfunctional body.  Stocking is exquisite from her first moments writhing on the floor in pain in her failed attempt to escape from her medical care facility, through the full cycle of plotting her own demise rather than be institutionalized, to discovering  her own unexpected resolve to live.  Stocking portrays Gretty with just enough grit to be flint hard without being annoyingly grating and with just a hint of a German accent, “of the enemy” she says wryfully.

Gretty has had it up to here with the being treated like a non-entity because of her disability and makes it very clear that she has the final say of what happens to her body despite her inability to control and move parts of it.  What Stocking can relay in a glance, a grimace, or a hot glare speaks volumes.  Similarly, her flashes of playfulness are endearing during playful interactions with her buddy in the assisted living quarters, but she really comes alive and animated when she connects with her dream guide Hideko played with cool charm by Caitlin Gold, a survivor of the atomic bomb.  Hideko personifies survival for Gretty.  In fact, Hideko’s very existence serves as proof that life, no matter how excruciatingly painful, is worth living, and Gretty has to figure out for herself if the truisms that Hideko spouts about forgiving those who have harmed you, finding balance, and “create your own freedom” really work when you’re ready to drop kick your life to the final curb.

Playwright Belluso has an enchanting way of getting to the heart of tough yet tender moments, and director Buck brings those moments to life.  The director has a handle on the difficult concepts and gets rock solid performances from the talented actors who give their all while maneuvering through treacherous emotional minefields and unpleasant nursing duties.  As side-kick Delores, Rosemary Regan gives a fun-hearted performance complete with raspy voice and razz-matazz delivery that belies the serious undertone just below the surface.  Ultra-talented Daniel Eichner does double duty as the caring doctor who takes a liking to the sometimes caustic Gretty, then transforms into a cheesy, pomade-wearing 1950’s television announcer all revved up to showcase “This is Your Life” complete with old time commercials with adorably ingratiating charm.  Field Blauvelt isn’t given much to work as the villainous and gruff medical director who makes dubious decisions about the patients but shows what can be done with well placed timing and commitment to even a two-dimensional role.

The basic set by Tony Cisek consists of a checker floor design and series of backdrop white curtains for a clinical effect while being surprisingly multi-purposed.  Also, the sound and lighting effects by Mark Anduss and Martha Mountain respectively deserve special commendation for a spectacular experience in the second Act.

The play is co-sponsored as part of The International Organization on Arts and Disability and provides an opportunity to showcase talented artists often shuttled to the side for having different abilities.  In the playwright’s hands and ably commanded by the director, the wheelchair often seen as an instrument of weakness for the infirm becomes a vehicle of freedom and strength.  It was an eye-opening revelation for me and worth attending to bear witness.

Gretty Good Time is part of the International VSA Festival

Got something to say? Go for it!